Passato Prossimo or Imperfetto? This is a common question asked by people who are studying Italian. In the following text, I tried to explain, with several examples, when you have to use the one or the other Italian tense. And hopefully, you will find this text easy to understand and useful! 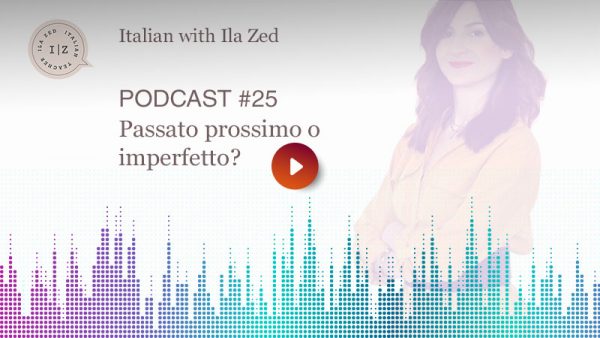 How many past tenses are there in Italian? Are they all used? What are the most frequently used, and which ones can be left out or studied at a later time?

I’m sure many of you already know the answers. In Italian, there are several tenses, many of which are past tenses. To communicate, it is not necessary to know all of them, although their knowledge will give you greater confidence when you have to speak.

Passato Prossimo and Imperfetto, are two tenses of the indicative mood, that I strongly recommend you to learn, as they are the most used past tenses in Italian. However, they can often be confusing.

It is not possible to confuse them for their form, as they are completely different. In fact, the first one is a compound tense (it means formed by two verbs), the other it is not, and their conjugation is also totally different.

So what is this confusion due to? For my students, it is difficult to understand when they have to use one or the other tense, since they are not interchangeable.

In the next few lines, I will try to give you these explanations in the simplest way possible.

Let’s start immediately with Passato Prossimo. This is perhaps the most common past in Italian, and you can resort to it for an infinite number of situations: talking about your last holiday, describing what happened to you during the day, talking about what a friend just told you…

To be a little bit more specific, this past tense is used for:

Let’s talk now about Imperfetto. This tense is a little less frequent than Passato Prossimo, but it cannot be ignored for this.
I recommend you to learn it since it is used in particular cases, like the following ones:

Let’s try to analyze these cases one at a time.

“It was a very nice house
Without the ceiling, without the kitchen
You could not go into it
Because there was no floor…”

This song by Sergio Endrigo is a perfect example of a description. In fact, there is talk of a house, and it is described using verbs in the imperfect.

In this case, it is not uncommon to find in the sentences the words mentre and quando, as in these examples:

– Mentre uscivo dall’ufficio ho sentito qualcuno che mi chiamava. (As I was leaving the office, I heard someone calling me).

Even the actions that we regularly carried out in the past, and that now for some reason no longer take place must be expressed with Imperfetto.

–  Da bambina giocavo con le bambole. (As a child, I played with dolls). = This action happened regularly in the past, but now that I am older I spend my free time differently).

– Da piccola cucinavo sempre con mia nonna. (When I was a child I always cooked with my grandmother). = Again, this action took place regularly in the past, but now the situation has changed: maybe I moved, maybe I no longer have free time, maybe my grandmother passed away…

Pay attention! What happens if we want to describe an action that did not take place regularly in the past? It’s easy, we use Passato Prossimo:

– Da bambina trascorrevo le mie vacanze al mare, ma un anno sono andata in montagna! (As a child, I spent my holidays by the sea, but one year I went to the mountains!)

I hope this long article will help you clarify and allow you to choose the most appropriate past when you need to express yourself.

As previously mentioned, and as you may be noticed from all these examples, Passato Prossimo and Imperfetto are not interchangeable: they are not the same, and the contexts and situations in which they are used are different.

But don’t worry, I’m sure that with a little exercise, the choice of the correct tense will become more automatic and natural.

Did you like the article “Passato Prossimo or Imperfetto?” Did you find it useful? Leave your comment, I can’t wait to read it!