How to Spell in Italian

How to Spell in Italian

Have you ever wondered how to spell names, surnames, or addresses in Italian?
Whatever is your answer today you are going to find it out. In Italian, we have a specific category of nouns that we use all the time in order to spell. If you want to know more about keep reading the following lines of my article “How to Spell in Italian”!

How do you spell in Italian? Have you ever thought about it? Even if you know the Italian alphabet inside out, you probably haven’t had many opportunities to try your hand at this task.

But don’t worry, I’m here, and at the end of this article spelling in Italian will no longer be a mystery.

The idea to write this article came from my sister, who was watching a detective series in which there were several teams called “Bravo team”, “Charlie team”, to which she said:

“It would be interesting to know how to spell in languages other than ours!

And no sooner said than done, I began asking my students questions here and there trying to gain the information I needed.

The investigation showed that in many countries people’s names are used for spelling, while in others there is no specific category to which they refer, but the important thing is that the words used are common nouns such as apple, dog, boy, which are all extremely common and therefore used and understood by everyone.

First of all, I would like to take this opportunity to help you learn a verb that even Italians do not use much: compitare. Compitare is the translation of the English verb to spell that is generally translated with the locution fare lo spelling.

Having said that, I would like to ask you something: do you know how to spell in Italian? Don’t worry, I’ll tell you: in Italian we spell using cities.

It is very interesting to note that the cities selected for spelling are not random but are rather the standard.  This means that all Italians will use the same cities to complete the spelling of names, surnames or something else.

Shall we try to spell some names?

To help you in spelling the names, I leave you a scheme with all the letters of the alphabet, the names of these letters (not their sound) and the name of the city corresponding to them.

Let’s start with my name: Ilaria 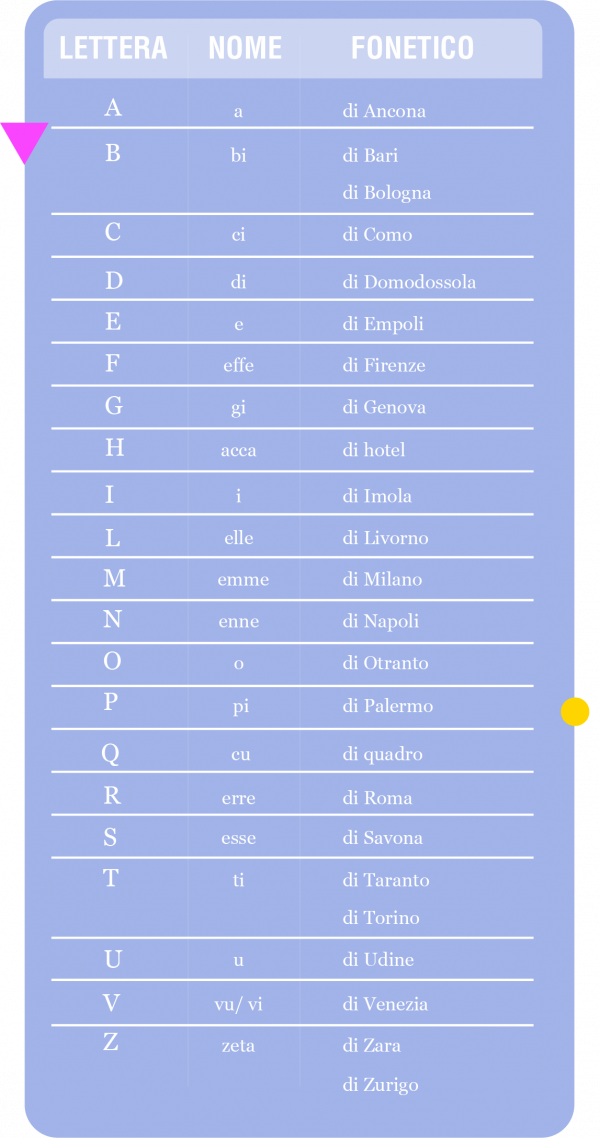 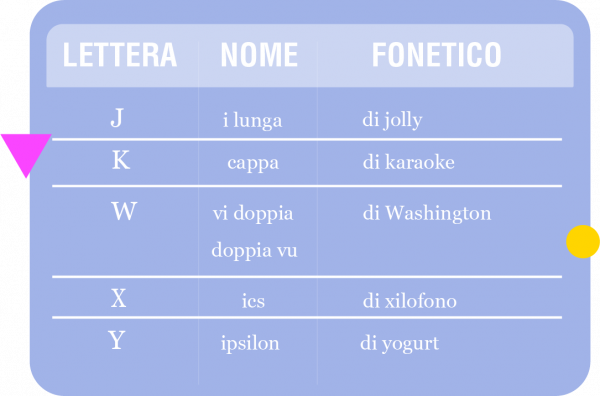 Yes, you got it right. I just mentioned two cities that may seem a little strange to you.

In the absence of a fairly well-known Italian city that begins with a Z we borrowed Zurigo (Zurich) from Switzerland. Sometimes when you need to spell a word that contains the letter Z you can also use the Croatian city of Zara (Zadar), which was an Italian city for a while.

When I told my students about this Italian town used for spelling, I was quite surprised to find out that they had never heard of this place, but I understand why. Domodossola is a small town of about 17,000 inhabitants and even if many Italians don’t know where it is or what there is to see in this place, I guarantee they will use it to spell a word containing the letter D.

How do you spell words formed by letters that are not part of the real Italian alphabet? To spell the letters J, K, W, X, Y, you simply say the name of the letter in Italian:

These letters are generally not associated with a specific word, as well as the H or Q, because the names containing them are difficult to confuse. However, it can happen that words of foreign origin are borrowed to further clarify the letter to be used, such as hotel for H, yogurt for Y or karaoke for K.

In this article I haven’t given you explanations about the Italian language or advice on how to best learn it, but I wanted to share with you an interesting fact about Italian that none of my students were aware of.

If you want to practice spelling, in the table above you can find all the information (name of the letters and city) that will allow you to spell any word you want.

Have fun and see you next time!