In this article called “Easter Processions” I am going to talk about this particular tradition. Even though Italy is a laic country there are still many religious traditions and the Easter processions are one of them. They are part of our culture and this is the reason why, every time, all the catholic celebrations and holidays are awaited with trepidation.

In this article, I am going to talk about the Holy Week Processions. Keep reading to know more about them!

Obviously, Easter is no exception: its celebrations, especially those of Settimana Santa, or Holy Week, (the week before Easter), are the most moving of the year.

In this article, I would like to focus on processions, in particular on two that take place in my region: the one in Troia and the much better known one in Taranto.

The Processione delle Catene is so called because, during this rite, five hooded men, dressed in a white robe, barefoot and with chains on their feet, fanno i sepolcri. The expression “fare i sepolcri” means visiting the altars of the churches, carefully decorated for the occasion, stopping there to partake in meditation.

You can imagine the feeling of anguish that can be experienced when listening to the silence of the alleys and narrow streets of the historic center broken by the noise of chains being dragged! 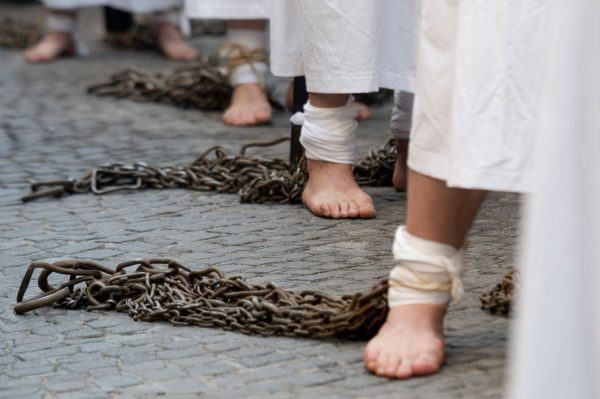 As it relates to the city of Taranto, we have two noteworthy processions: the Processione dell’Addolorata on Holy Thursday and the Misteri on Good Friday. For now, I will only focus on the first one.

The Processione dell’Addolorata begins on the afternoon of Holy Thursday. The Confratelli del Carmine walk barefoot with hoods through the streets of the city to go from church to church (per fare i sepolcri). During the whole route the band accompanies them by singing funeral marches. The way in which these men move is very particular: a slow and exhausting rocking, which makes these men remain almost always in the same place. Due to this, the road to travel which is relatively short, can seem almost endless.

In fact, this procession ends on the afternoon of Good Friday, after hours and hours, in order to allow for the start of the second procession, that of the Misteri, during which statues are also carried in procession. 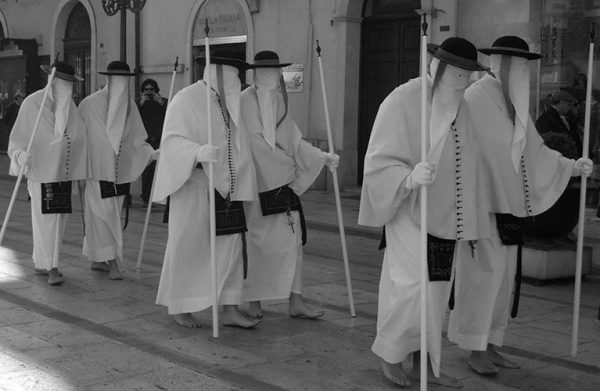 If you ever find yourself in Italy during the Easter period and you come across one of these ceremonies, don’t worry! You haven’t been magically catapulted into another century and nothing serious is happening. You are just witnessing some rites that are still very much thriving and felt by the faithful, who by participating in them feel part of a community!